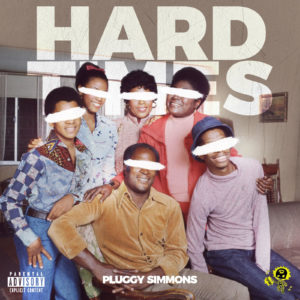 Philadelphia Hip-Hop artist Antonio Spady, better known as Pluggy Simmons, is a growing success story with a background that most would find highly relatable—a life filled with struggle & bleak opportunities. Though he lacked such opportunities growing up, he knew how important it was at an early age to be a leader and set out after his own goals. At the age of 12, Pluggy Simmons developed a hustlers mentality and relied on that to earn the money he needed to finance the CD’s, the CD burner, CD covers, and everything else that would be needed to launch his rap career.

Music was his passion, but he made a promise to his family to finish school, and so he fulfilled that before taking the next steps towards his growing music career. With his family as his main priority and motivation to continue on, he went all in with music to provide them the life he felt they were deserving of. He made the decision to take his music serious, and he never looked back.

Fast forward to present day endeavors, Antonio Spady is now very well known through the rap community as Pluggy Simmons. Just last month, he released a new album titled ‘Hard Times’ reflecting on the process he went through that brought him where he is today. His lead single ‘Energy,’ produced by DJ Young Vern has already garnered over 10,000+ streams across all platforms, and it has only been out for a month. He also recently launched the Pluggy Support Fund to help aid people in his community who may be experiencing some of the hard times he has throughout his life. Through his foundation, he’ll be gifting those in need with funds for essentials everyday for a full month during this COVID-19 crisis.

Pluggy Simmons has good intentions in and outside of music. His goals supersede his personal wants & desires. He’s making his career about helping others during their hard times, as well. With a mission like that, it surely makes his music more philanthropic and impactful.