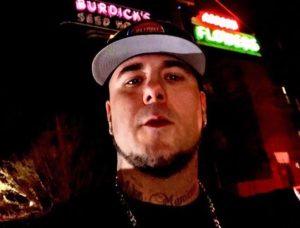 Today Michigan rapper Mike Spitz drops the visual to his track based on his Midwest hometown, “Saginaw, Michigan.” The track is taken from his upcoming project, Best You Never Heard set for release in the coming weeks.

One trip up I-75 from Detroit and through Flint and you will come to small town named Saginaw. Known for violence, basketball and failed economic hopes, Saginaw is a struggling part of America’s decaying rust belt, yet Saginaw is a place called home to many who love the city like Mike Spitz.

“It is a look into my world,” Mike Spitz said of his new song about his hometown.”This song tells you about myself and where I’m from. The video was shot at an early 1900’s mansion in Saginaw that’s believed to be haunted so the video is a little bit crazy. But isn’t everybody?”

According to Mike Spitz, Saginaw brought out the unique raw emotion and real life lyrics in his music. This is the first video of four that will come from Mike’s project, Best You Never Heard and is directed by Fresh Rich Visuals.

The album features production from Cory “Co-P” Peterson and also Mike Spitz himself along with some special guest appearances from Jelly Roll, Rikk Reign, Woody Gates with additional guitar by Shawn Yancer.

“I’m actually shooting 3 more videos in the next month and I’m working on my follow up album right now. It’s gonna be a 10 song story completely produced by Scattered Brains (Struggle,Jelly Roll,Adam Calhoun, Waylon & Willie) at his studio in Tennessee,” Mike Spitz said. “We had a lot of stuff planned but then this f**kin Coronavirus sh*t hit. Everything keeps being cancelled – my state is on complete lockdown. So I’ve been just writing and shooting as many videos as possible. I’m just trying to take advantage of the world shutting down. Probably will never happen again.”