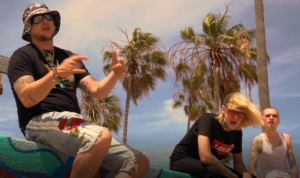 Recently Gringo Gang released their new single “She Like” produced by BuddaBlessThisBeat.

Rising up from deep in the Midwest, Gring Gang has an electric blend between contemporary Hip-Hop and Grunge Rock. Gringo Gang, comprised of SpaceDad, Shawn Ham, and Tahko are well known names in their hometown and are now spreading their buzz throughout their region and in Los Angeles.

Over the course of their three-year musical journey, the group has released genre blending music that not only pushes their sound forward but also challenges their listeners. Their latest single “She Like” is another step towards progression.

Produced by BuddaBlessThisBeat, the group puts together a track not only for their fans to bang at a house party, but for DJs to play at the club, and specifically the strip club. When describing their overall sound Shawn Ham also said, “We are aggressive trap.”

“I’ve got the grunge rock hip-hop blend going on. I don’t do too much rapping anymore. I do here and there cause it’s still fun. It’s different than writing something that you are going to sing. I make Lil Peep inspired music,” Tahko went on to say,

SpaceDad chimed in, “Me and Shawn are on the hustling side of things and Tahko’s more on the rock side of things. But it all comes together. As a group we have a party music type of thing.”

Working with Gucci Mane’s DJ, DJ Champ, who mixed their last two projects, Gringo Gang Vol 1 & 2, the group has all the pieces for a success story.

“She Likes is a crosswalk where alternative and trap and club music intersect.” Shawn Ham said, “It’s a change of pace because this is the first time we have Tahko singing on the hook and going towards the ladies more. We wanted to go more towards that lane. It’s something you would hear at a strip club.”

“We had some of the Pacers wearing some of our shirts. Lance Stephenson is the reason why the Pacers know of our shirts” SpaceDad said, “He came to the store and we made this gold foil trophy on the back. It was the year they almost made it to the finals. All the players wanted one and we ended up selling out.”

Closing out the year, the group says they are focused on working on more singles, merch, going on tour, and possibly dropping a new project.

Catch them this November on the road with Doobie for the “Faithfully Faded” tour.