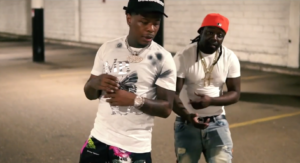 Recently rapper Fat Yunginn and Cash Money Records released his newest music video featuring Rylo Rodriguez titled, “No Choice.” Filmed in Rylo’s hometown the video shows the two rappers interacting and flashing their jewelry as the two rap about their lack of options coming from the streets.

“We linked up when he had a show at Dallas at V Live. I think one of his managers hit me back and he knocked out his verse in like 30-45 minutes,” Fat Yunginn said. “It’s a song about how a nigga had to do music because I had No Choice or I’d be dead or in jail. I had  No Choice but to make it happen or I could be dead or in jail. We shot some of the scenes in Atlanta and we shot some scenes in Mobile, Alabama where Rylo is from.”

Since the announcement of Fat Yunginn‘s signing to Cash Money Records via sites like Billboard, AllHipHop, Hype Magazine and his hometown newspaper the Dallas Observer, Fat Yunginn got a crazy response but has since had to make adjustments to his plans with the Coronavirus becoming a pandemic.

“I been getting a lot of calls for interviews and shows, but with the Coronavirus it’s been a little bit on hold. Everybody in the house so it’s just time for me to release videos. Soon as I signed this happened. Two weeks later I had some shows and interviews going on but then it slowed down. We still working and I got the home studio now, so I’m gonna record at the crib. I might go head a do an IG Live concert or something. Sack Season the mixtape is still on the way,” Fat Yunginn said.

First getting notoriety for his song “Sack Up” in 2016, Fat Yunginn says he always wanted to sign with Cash Money Records and that it’s a “perfect match.”

“I grew up off Cash Money, I grew up listening to them. I ain’t gonna lie I always wanted to be on Cash Money and I always wanted to sign with them. I don’t really go off what other people say or what they do and say about Cash Money. Birdman came up talking about he was the #1 Stunna and if you listen to my flow you can hear my ooh flow fits with this brand. Sack Season / Cash Money Records. It’s a perfect match.”

Raised in Dallas’ Pleasant Grove, Fat Yunginn drew inspiration from his father’s unexpected murder and from there he began to take off on the strip club scene in Dallas.

“I’m from Dallas Texas, from a hood out there called Pleasant Grove. I started doing music once my Pops passed away and I just took to music and it was just going up from there. Once I dropped Sack Up it went crazy in the strip clubs and so after that I started taking it more seriously.

Going forward Fat Younginn is preparing for the release of his next single called, “Show My Ass” featuring fellow Dallas rapper Yella Beezy.

“I got a lot of unreleased music I can’t wait for the fans to hear it,” he added.