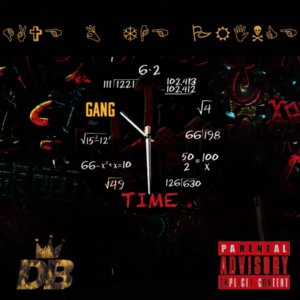 Today South Central-bred rapper Dave B. the Prince releases his new single “Gang Time.” Touching on the code of the streets and the mackin’ way of life, Dave B. the Prince raps about the life he grew up experiencing in the Jefferson Park area of Los Angeles.

Rapping with an undying dedication since 2007, by 2018 Dave B. The Prince felt he had mastered his craft. From writing on the spot to keeping on topic, Dave had practiced everything from his melodies and pitches to his similes and conjunctions. From vocabulary to the art of understanding people and how they react. Now with a host of material recorded Dave B. the Prince is ready to release his new song, “Gang Time.”

“Gang Time, is something new and fresh and it’s something nobody has ever heard. It’s a mix between some mackin activity and some hatin activities. The person that talk about it the most not really about it. If you start it, finish it strong and if you did some shit, don’t speak about it, you ain’t gotta be nobody’s show pony.” Dave B the Prince said. “I talk a lot of gang shit on there. Thats just the code, that’s just the way of life. I’m not just for me, I’m for my people, my squad and my community. Gangs were started as a way to stand up against the police and to protect the community, so there’s some player stuff mixed in there with the Gang Time”

The song will find a home on Dave B. the Prince’s forthcoming project Death Certificate, which will be his debut project featuring approximately six new songs for the fans.

“The track is going to be on my project Death Certificate. Its my first album, but its crazy that I didn’t even realize, one of the producers on the project told me that Ice Cube’s album was called Death Certificate and it came out in ’91, the year I was born. I didn’t know it, but that matches up and its my baby. Starting off a new decade with a whole new fresh start. The EP is going to drop this Spring, I’d like to give them at least 6 songs.”

Hoping to build upon his performance at the Top Dawg Entertainment Christmas Concert, Dave B. The Prince is looking to start performing more in the coming weeks and months.

“It was beautiful for me man, it was a day to give back to the community and shout out to TDE and Hollywood and PurpleTang Media for booking the show for me. My guy Hollywood connected us and we got it done. There was a line all the way around the block and you had to bring a tour to get in. It went around several blocks and the line was still going. There were like 4-5000 people there,” Dave B. the Prince said.

Adding to his experience on stage rapping Dave B. the Prince, is well versed in the world of dance and incorporates the art form in his music.

“Dance has always been a great way for me to express my art and I feel like its a necessary tool for me when i comes to creative because I come at a song like a dancer and sometimes I come at it on some street shit or sometimes I come at it with my feelings. It gives me another aspect on my music and my dance and so its always going to be something that I always do and so I just gotta stay on it with the moves to give people what they want to see. I’ve learned that fans really do help me and the feedback that I get really helps me. Everyone got haters, but as far as the real fans that give good feedback – that feedback can motivate me to do a full album.”

Part of what separates Dave B. The Prince from his competition is admittedly the fact that he is an Albino rapper, following in the footsteps of Brother Ali and Krondon to name a few.

“I come with constant heat, but the only thing that separates me from everyone else is I don’t look like everyone else. I grew up in the hood and I’m an Albino rapper so I have already been through all the things in life that people throw my way. Really it’s just another life experience or something that I go through. I’m not a quitter and I still always came out on top not matter the obstacle,” Dave B the Prince said. “Just having to start over with the nonsense everywhere I went. There was always someone trying to test me. I never got comfortable. Everywhere I went I had to fight, and so by 7th grade nobody wanted to f*ck with me. Every new school I went to it was a start over again having to defend myself just to be me. So thats how I approach a lot of things like rapping or life in general. ”