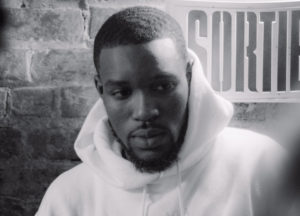 Today Canadian R&B/Rap sensation CJ Flemings delivers his newest project, Mascara Tears. Delving deep beyond the superficial appearance of the album title, CJ Flemings spent years developing his breakthrough project that has once again shined a bright light on the Canadian urban music scene. While some fans pressing play on Mascara Tears might be unfamiliar with CJ’s sound, CJ Flemings pulls on the heartstrings of his listeners while also providing music that Hip-Hop fans can ride to, a duality rarely seen in today’s artists.

Known by his fans as the “Soft Spoken Prince,” this cold weather crooner has been making music since he was 12, developing himself and his sound for almost a decade. Drawing inspiration early on from some of the greatest rappers of all time like Lil Wayne and Kanye, CJ Flemings’ sound eventually evolved in to an R&B sound with all the nuances from Hip-Hop that he grew up admiring.

Executive produced by his close collaborator Michael Lantz, Mascara Tears carries a theme that took CJ nearly 5 years to bring to perfection. Since then the album has earned thousands of streams online and he’s been featured on numerous Canadian radio shows that have highlighted his undeniable ability to reach listeners with both Hip-Hop and R&B flavored music.

“Mascara Tears is a project that I had to put out. It was produced by Michael Lantz who was my executive producer for the project, but Lance and I sat down and he worked with me for the whole project. I decided to call it Mascara Tears, which is a title I had for about four or five years. For a while I was kind of sitting on the title and trying to figure out what the message and theme were going to be, revolving around it,”CJ Flemings explained. “I feel like it’s the perfect title because it’s not what the title would seem. My story is authentic and that what I think people look for in relationships. For example you may have situations going on where women tend to use mascara to cover up their flaws. If you just keep in authentic you might not run into those issues and it might not have been as much of a disaster as if they had stayed true to themselves and kept it real. There’s no need to cover up your flaws, you just have to keep it real.”

Led by the singles, “Don’t Know You,” “Acquainted,” and “Judgement,” this project shows CJ Fleming’s versatility and ability to make upbeat R&B music that connects with a Hip-Hop base.

“You hear it in the album from beginning to end. I did the best I could to deliver the message of being yourself and not switching and just keeping it solid personally. With everything gong on I wanted this album to touch everybody in a way so that they could use this album to not feel like they are doing something wrong. Sometimes relationships are tough and this album kind of is a guide for your emotions. I feel like I had to put myself in a very vulnerable position to make this album so I hope that this is relatable and whatever the case may be I hope people can connect.

Backed by a host of appearances on radio including his Live Nation performance in support of his project Mascara Tears, CJ has connected with fans more than ever on this project.

“In November I started doing a whole bunch of press and we had three shows where I did eventually opened up for Jack Harlow’s show. Jack and I were able to connect like it was nothing. The Lil TJay show as sold out and I did a set there and the crowd went crazy. During that time it was kind of wild experiencing all that press in one week and I was really conscious of my performance and being on time,” CJ explained.

To date CJ Flemings has blessed the airwaves of The Beat 92.5 with Jeremy White, CBC Montreal Radio with Sabrina and Duke, CKUT 90.3 FM – All The Way Live, CINQ 102.3 FM, Global News, Toronto: Live Nation’s One To Watch @ the Lounge by Live Nation, Virgin Radio 95.9 Recap Rap with Adam Greenberg and many others.

“These songs that are buzzing are all songs that I have grown and developed based on organic reaches. For every song that’s out I feel that I grow beyond the song once its out, but I love all the songs and can’t wait for the fans to connect.”